The Bird We Love to Hate

I think we can all agree that European Starlings are not the most beloved of birds. They roost in large, noisy flocks and compete with some of our favorite songbirds for nest sites. And they’re not the prettiest of birds, although in spring and summer their feathers have an amazing iridescence. Starlings are one of the most abundant birds in North America and they are also one of the most disliked and one of the most fascinating. 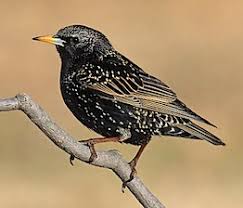 Starlings are related to mynas and share their ability to mimic human speech. In fact, that is how they ended up in North America. In the late 1800’s the American Acclimatization Society imported 100 starlings into New York City as part of their plan to populate Central Park with have every bird referenced in Shakespeare. Shakespeare mentioned starlings only once in all his plays; Henry IV, Part 1 Act 1 Scene 3. Hotspur is furious that Henry won’t ransom his brother-in-law Mortimer and has even forbidden him to Hotspur to talk about him. Hotspur plots his revenge on the prince by threatening to “have a starling shall be taught to speak/ Nothing but ‘Mortimer’ and give it him / To keep his anger still in motion.” Most of the birds the society imported did not survive, but after 60 years the European Starling had crossed the continent and was thriving all over the continent. How ironic that the bird that was used in the play as a means of vengeful irritation would prove to be such a troublesome pest!

The Eurpean Starling has a unique jaw musculature, which allows the starling to find insects that most birds cannot. Most species use their muscle power to close their bills, but the starlings’ jaw muscles are stronger when used to open their bills. The bird can poke his bill into the soil or plant matter and then spring it open to reveal hidden insects. This movement also causes the eyes to move forward so that the bird has binocular vision to make it easier to see both moving and stationary food sources.

Starlings are adaptible cavity nesters; they can make their homes in tree cavities, birdhouses and even crevices in buildings. Starlings have been known to actively evict Red-headed Woodpeckers from their own nests and are sometimes blamed for the population decline of other cavity nesters such as Eastern Bluebirds, Northern Flickers and Red-headed Woodpeckers. Unlike most cavity nesters, starlings build nests inside the holes. Along with the dead grasses, they also add fresh green vegetation that are carefully chosen to repel parasites. The birds keep the nest clean and keep adding more fresh greenery to keep mites and other parasites at bay until the baby starlings have feathered out.

The diet of the European Starling is composed primarily of insects, fruit and some seeds. At the feeder, they will gobble up suets, cracked corn, shelled peanuts and peanut hearts, and baked goods. But are less likely to eat whole corn, peanuts in shell and sunflower seeds. The best way to keep them from cleaning out your feeders is to use a caged feeder, which prevents them from accessing the food.

A flock of starlings is called a murmuration. A murmuration of starlings. I love that. My favorite video of a starling murmuration was filmed by travel journalist Dylan Winter as he travelled around the UK in an 18 foot long boat. The background music is Pachelbel’s Canon performed by the London Symphony Orchestra, so be sure to watch with the sound on. This mesmerizing video of the twilight roosting display may not make us love them, but at least we can begin to appreciate this fascinating bird.

Discover the Joys of Attracting Birds